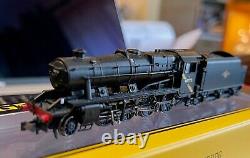 Boxed including accessory pack, instructions and paperwork. The photos are of the actual locomotive and box. Will be posted first class signed for! Bachmann's newly tooled Graham Farish LMS Stanier 8F No. 48773 certainly looks striking in its BR Black (Late Crest) livery and we are also delighted to be able to offer you this model with SOUND FITTED making running this loco all the more realistic!