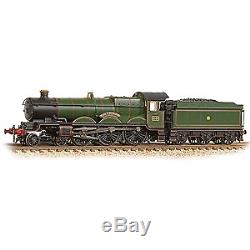 Graham Farish 372-030 Castle Class 5044 Earl of Dunraven GWR N Gauge. The 4073 Class or Castle class were 4-6-0 steam locomotives of the Great Western Railway, built between 1923 and 1950. They were designed by the railway's Chief Mechanical Engineer, Charles Collett, for working express passenger trains.

Over the twenty-seven years from August 1923 to August 1950, 155 Castles were built new at Swindon Works and a further sixteen were converted from other classes. In 1926, number 5000 Launceston Castle was loaned to the London, Midland and Scottish Railway where it ran trials between London and Carlisle. The Castle class was noted for superb performance overall, and notably on the Cheltenham Flyer during the 1930s: for example, on 6 June 1932 the train, pulled by 5006 Tregenna Castle, covered the 77.25 miles from Swindon to Paddington at an average speed of 81.68 mph start-to-stop. The type was widely seen across the Western region of British Railways. The item "Graham Farish 372-030 Castle Class 5044 Earl of Dunraven GWR N Gauge" is in sale since Friday, March 6, 2020.

This item is in the category "Collectables\Model Railways & Trains\N Gauge\Locomotives". The seller is "gjcorgi" and is located in UK.