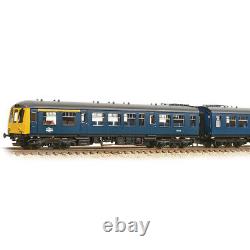 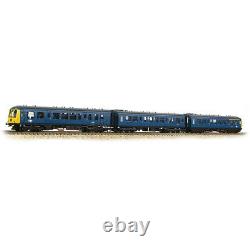 NEM Couplings & Accessory Pack included. 2 x 6 Pin Decoders needed for DCC (36-568A). The British Rail Class 108 diesel multiple units were built by BR Derby from 1958 to 1961, with a final production quantity of 333 vehicles. The units saw prolific use over the London Midland and Eastern regions, and are associated with Lancashire, the Cumbrian Coast route, services around Manchester and around Yorkshire and the North East. They appeared in green, blue and refurbished blue and white liveries, including those sponsored by PTEs.

These units stayed in regular service until 1990, when they began to be withdrawn from traffic. They were replaced on regional services by the new "Sprinter" derivative units, or by "Turbo" units on services around London. The final units lasted in traffic until October 1993, although many saw further use in departmental service, as sandite or route-learner units.

Good condition on withdrawal and lack of asbestos has ensured that many of this class are now used on preserved railway lines. The model is new we are a Graham Farish / Bachmann stockist. (EXCLUSIONS APPLY SEE T&C'S FOR DETAILS). Local Collection Can Be Arranged From Our Shop.

(a) send them back, or (b) hand them over to 1825 Models or to a person authorised by 1825 Models to receive them. The consumer must bear the direct cost of returning goods. The address to which goods must be sent is, 1825 Models, 57b Grays Road, Grangefield, Stockton-on-Tees, TS18 4LL, without undue delay and in any event not later than 14 days after the day on which the consumer informs 1825 Models of the cancellation. 1825 Models fully complies with The Consumer Rights Act 2015. The Consumer Rights Act 2015 became law on 01 October 2015, replacing three major pieces of consumer legislation - the Sale of Goods Act, Unfair Terms in Consumer Contracts Regulations and the Supply of Goods and Services Act. The following are statutory rights, under a goods contract. Goods to be of satisfactory quality. Goods to be fit for particular purpose. Goods to be as described. Other pre-contract information included in contract. Goods to match a sample. Goods to match a model seen or examined. 1825 Models to have right to supply the goods etc. What remedies are there, if statutory rights under a goods contract are not met? Consumer's rights to enforce terms about goods.