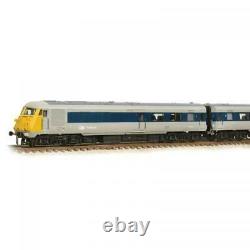 BR'Western Pullman' 6-Car DEMU BR Grey & Blue 371-742. The two 6-car Midland Pullman sets ran from 1960 to 1966 in the morning from Manchester Central to London St Pancras, a fill-in journey from St Pancras to Leicester, Loughborough, Nottingham and return, and an evening return to Manchester. With completion in 1966 of the electrification of the West Coast Main Line from London Euston to Manchester Piccadilly, there was the opportunity for a faster electric-locomotive-hauled Pullman service than the diesel sets, the Midland Pullman sets became surplus to requirements on the Midland Main Line and were transferred to the Western Region in March 1967.

Here they gained the reverse corporate Blue & Grey BR livery associated with Pullmans of the era, plus cab front apparatus to enable multiple working between South Wales and London Paddington. This operating diagram, specially drafted to utilise the displaced Midland sets, saw the train split at London, and work independently to Oxford and along the Berks & Hants during the day before pairing back up for an evening working back to Wales via Swindon and Bristol. Along with the native Western sets, the ex-Midland Pullmans were sadly withdrawn early in May 1973 after only 15 years service. They had seen some use to off-region destinations, chiefly as Football Specials, a duty maybe at odds with their opulent Pullman origins! Nonetheless the 6-car set is a seriously impressive train and Rule One applies! The item "Graham Farish 371-742 BR'Western Pullman' 6-Car DEMU BR Grey & Blue" is in sale since Wednesday, April 29, 2020. This item is in the category "Collectables\Model Railways & Trains\N Gauge\Locomotives".