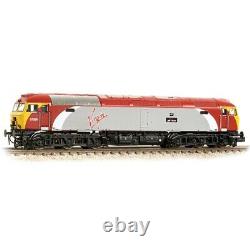 The locomotives are fitted with a refurbished EMD engine and a re-conditioned alternator, improving reliability and performance. The class has its origins in 1997 when Freightliner ordered an initial six locomotives. A prototype locomotive was converted by leasing company Porterbrook, with electric train heating in 2001, with a view to obtaining orders from passenger companies.

57s are something of a'Marmite' class with enthusiasts because although they keep loco-hauled services alive, they'snatched' the bodies of much-loved Class 47 donors! The model is new we are a Graham Farish / Bachmann stockist. Local Collection Can Be Arranged From Our Shop.

The Consumer Rights Act 2015 became law on 01 October 2015, replacing three major pieces of consumer legislation - the Sale of Goods Act, Unfair Terms in Consumer Contracts Regulations and the Supply of Goods and Services Act. The following are statutory rights, under a goods contract. Goods to be of satisfactory quality.

Goods to be fit for particular purpose. Goods to be as described. Other pre-contract information included in contract.

1825 Models to have right to supply the goods etc. What remedies are there, if statutory rights under a goods contract are not met? Consumer's rights to enforce terms about goods. Time limit for short-term right to reject. Right to repair or replacement Right to price reduction or final right to rejection This Wording Is The Intellectual Property Of 1825 Models 14/01/2021.