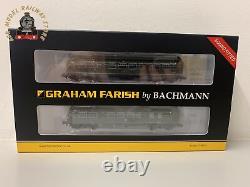 Featuring detailed bodywork and interiors the bogies have been finely rendered and all of the chassis-mounted equipment is present and correct too. The exquisite livery application is the icing on the cake for this N scale model with the verdant paintwork enhanced by the silver window frames and cream lining and speed whiskers a livery synonymous with these early multiple units. Mechanically the model is driven by a three pole motor with flywheel and directional lighting is fitted to both vehicles for ultimate realism this model is also. Pristine BR Green livery with Speed Whiskers.

F18 - Fade All Sounds. F20 - Power Car - Directional Lights Off. F21 - Trailer Car - Directional Lights Off. F22 - Rail Clack Sound Off. F23 - Compressor Speed Up. Please note that normal load running sounds and any other automatic or randomised sounds will also operate when this model is used on analogue control (DC) straight from the box! The Class 101 Diesel Multiple Unit (DMU) was one of the most numerous and widely used types of all the first generation DMUs.

Typically formed into two- three- or four-car sets the first examples were introduced in 1956 and more than 600 vehicles including driving vehicles fitted with a cab at one end and corridor gangway at the other and intermediate cars with corridor gangways at both ends were built by Metropolitan Cammell at Washwood Heath in Birmingham. Initially allocated to the North Eastern London Midland and Scottish Regions the units later saw use on the Eastern and Western Regions with occasional running into Southern Region territory too. Fitted with the Blue Square control system the Class 101s could work in multiple with other 101s and numerous other DMUs when additional capacity was required. During the 1970s BR embarked on a refurbishment programme to provide passengers with an improved travelling environment and the Class 101s were used as a testbed for these works which resulted in the majority of Class 101 vehicles being refurbished over a period of almost ten years.

In later years many sets were given an additional makeover to extend their passenger service life whilst others found new roles carrying parcels as route learning units and for sandite operations. Around thirty two-car units were still in traffic at the start of the 21. Century making the Class 101 one of the final first generation DMUs to remain in revenue-earning service. The type remains popular today with more than forty vehicles being preserved and these can now be found operating on preserved railways around the UK. This item is in the category "Collectables\Model Railways & Trains\Railways & Trains\Locomotives". The seller is "agrmodelrailwaystore" and is located in this country: GB. This item can be shipped to United Kingdom.