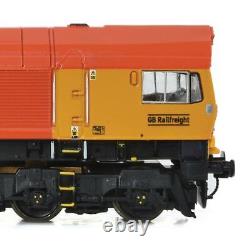 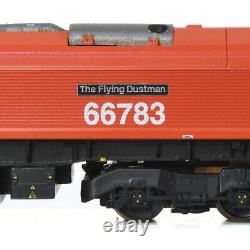 Graham Farish by Bachmann 371-399. N Gauge, EMD Class 66/7 Co-Co. Locomotive, number 66783'The Flying Dustman' in GBRf Biffa livery. DCC Ready (6 pin) with working directional lights. In Continental Europe it is marketed as the EMD Class 66. The ability to simply start up'66s' on the dockside and drive them under their own power to depots to enter service was nothing short of a revelation compared with many other BR locomotives, particularly the BR Class 60s. Each locomotive is specified and guaranteed to 95% availability, aiming for a minimum of 180 days mean time between failures. The initial classification was as Class 61, then they were subsequently given the Class 66 designation in the British classification system (TOPS). In 1998 Freightliner placed an order for locomotives.

They were followed by GB Railfreight, and then Direct Rail Services. The last of more than 500 built over an 18-year period was No 66779, Evening Star, delivered to GB Railfreight in spring 2016.