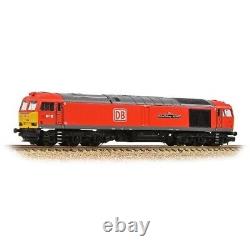 The Graham Farish Class 60 is back and better than ever before and we are delighted to present this model of No. 60100 in the eye-catching DB Cargo livery. Capturing the strong, angular looks of the Class 60 to a tee, the highly detailed Graham Farish model has been treated to a new chassis which incorporates a Next18 DCC decoder socket and speaker. Not only have we added the possibility of sound, but the lighting features have been upgraded too, and now include directional head- and tail-lights which can be switched on/off at each end independently - on DCC or via the PCB-mounted microswitches when used on analogue - and, when used on DCC, cab lights which can also be turned on/off independently of each other via two separate DCC functions. Directional lighting, switchable on/off at either end on DCC or Analogue control. Cab lighting, assigned to two DCC functions for separate switching of each (when used on DCC). Equipped with a Next18 DCC Decoder Socket - Recommend Decoder item No. The British Rail Class 60 is a Class of Diesel-Electric Locomotive built by Brush Traction in Loughborough, Leicestershire between 1989 and 1993.

Affectionately known as'Tugs' by enthusiasts due to their Mirrlees marine-derived powerplant, 100 locomotives were built and the first entered service in late-1990 - more than a year after the first example had been ceremoniously handed over to BR - after various technical issues were uncovered during testing of the first locos. However, a number of locomotives were retained as the heaviest trains could not be hauled by a single Class 66 and instead required the superior power of a Class 60. EWS was acquired by DB Schenker in 2007 (later renamed DB Cargo) and the new owners put several Class 60s up for sale, however they also announced overhauls for some 60s, giving the class glimmers of hopes for the future. 60002 that was named'Graham Farish - 50th Anniversary 1970 - 2020' to mark 50th anniversary of production of British N scale models by the brand which is now owned by Bachmann Europe.

Along classic Lines is an online Model Railway retailer, Our E bay shop sells Model Railways old and new in a range of gauges and outlines. From the menu on the left select the gauge you are interested in and explore our range, we are friendly and approachable and are happy to answer your questions. This item is in the category "Collectables\Model Railways & Trains\Railways & Trains\Locomotives".