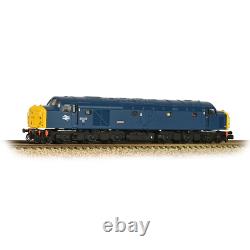 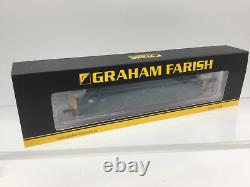 Graham Farish 371-184 N Gauge Class 40 Disc Headcode 40012 Aureol BR Blue. PLEASE REVIEW THE PHOTOGRAPHS AS WELL, ACCESSORIES/BOXES ETC WILL BE SHOWN IF THEY ARE INCLUDED. We are pleased to expand our range of Graham Farish models with this workhorse Class 40 with Disc Headcode No. 40012'Aureol' in BR Blue livery.

A total of 200 were built by English Electric between 1958 and 1962 and numbered in the series D200-D399. They were for a time the pride of the British Rail early diesel fleet. The final locomotives ended regular service in 1985. Class 40s operated in all areas of British Railways although Western and Southern Region workings were less common. After the early trials, the majority of Class 40s were based at depots in northern England; notably Longsight, Carlisle Kingmoor, and Wigan Springs Branch on the Midland Region, and Thornaby and Gateshead on the Eastern Region.

The heyday of the Class was in the early 1960s when they hauled top-link expresses on the West Coast Main Line and in East Anglia. As additional new rolling stock was introduced, their passenger work decreased, partly due to their lack of electric train heating (D255 was fitted with electric train heating for a trial period in the mid-1960s) for newer passenger coaches. This resulted in visits to many distant parts of the network. It would be fair to say that few routes in the London Midland and Eastern regions did not see Class 40-worked passenger services from time to time.

Regular destinations included the seaside resorts of Scarborough, Skegness and Cleethorpes on the Eastern region, with Blackpool and Stranraer being regularly visited on the West Coast. Recommended for use with Decoder 36-567A. The British Rail Class 40 is a British Railways diesel-electric locomotive, rated at 2,000 hp and classified as a Type 4.

We make every effort to describe items accurately, however, nobody is perfect and on the odd occasion we may miss something. If you see anything which is incorrect in this listing, or wish to double check something, please feel free to ask a question. We include pictures of detailing packs, instructions and boxes etc if they are present and included in the price, if they are not in the photo's, you can safely assume they are not there.

If in doubt, please ask and we will confirm. The photographs are also part of the listing, please review them carefully. You can do this by selecting the Request Total button during Checkout (this works only when using the E-Bay Website, it does not appear on the mobile app).

If you receive an item which is not in accordance with the listing, please get in touch BEFORE leaving feedback or opening a return. Resorting to bad feedback without giving us the opportunity to address the issue helps nobody.

The item "Graham Farish 371-184 N Gauge Class 40 Disc Headcode 40012 Aureol BR Blue" is in sale since Friday, April 16, 2021. This item is in the category "Collectables\Model Railways & Trains\N Gauge\Locomotives". The seller is "hampshiremodels" and is located in Basingstoke, Hampshire.