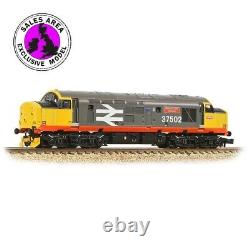 Graham Farish by Bachmann 371-167TL. N Gauge, English Electric Class 37/5 Co-Co Diesel Locomotive. Number 37502'British Steel Teeside' in British Railways Railfreight Red Stripe Large Loco grey livery. 37502'British Steel Teesside' finished in the colourful BR Railfreight Red Stripe livery. The Class 37 is a favourite for many and the Graham Farish model captures the unmistakable look of the 37, with this version correctly exhibiting the characteristics of a refurbished loco - most notably the flush ends where the headcode boxes have been removed, and the fitting of a high intensity headlight which is operational, of course.

The Railfreight Red Stripe livery is certainly eye catching, with the grey body contrasting against the yellow and black nose ends, along with the prominent red stripe at solebar level. The large logo and running number stand out on the bodyside, whilst the nameplate and Kingfisher monogram complete what is a very attractive model indeed. Pristine Railfreight Red Stripe livery.

Equipped with a 6 Pin DCC Decoder Socket - Recommend Decoder item No. Sales Area Exclusive Model - available from retailers in selected areas (see map for more details). The British Rail 1955 Modernisation Plan paved the way for the large-scale replacement of steam traction with diesel locomotives, and one of the most successful diesel locomotive designs to result from this was the English Electric Type 3. These 1,700hp Types 3 diesel-electric locomotives were built at English Electric's Vulcan Foundry and by Robert Stephenson & Hawthorns between 1960 and 1965, with 309 examples produced in total. The class proved popular with railwaymen and so in 1985, a major refurbishment programme for the Class 37 locomotives was sanctioned to extend the working lives of 135 locomotives. Features of the refurbishment involved plating over the four-character head codes and sealing off the nose end communication doors. A new subclass was created for locomotives refurbished with Electric Train Heating (ETH) equipment, allowing their use on passenger trains the whole year-round. The Class continued to be widely used into the Privatisation-era, with examples operating for the likes of EWS, DRS, West Coast Railways and Colas, whilst others have received'retro' heritage repaints. Along classic Lines is an online Model Railway retailer, Our E bay shop sells Model Railways old and new in a range of gauges and outlines. From the menu on the left select the gauge you are interested in and explore our range, we are friendly and approachable and are happy to answer your questions.