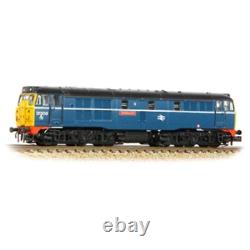 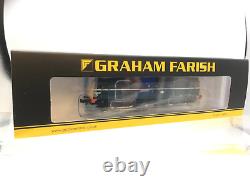 Graham Farish 371-112B N Gauge Class 31/1 31309'Cricklewood' BR Blue. PLEASE REVIEW THE PHOTOGRAPHS AS WELL, ACCESSORIES/BOXES ETC WILL BE SHOWN IF THEY ARE INCLUDED.

WORKING ORDER: Yes COSMETIC CONDITION: New. The Class 31 is a favourite among enthusiasts and this Graham Farish model is a faithful rendition of these fan-favourites. The BR Blue livery applied to'Cricklewood' was enhanced by its namesake depot with the addition of red bufferbeam cowling and the white bodyside stripe, a throwback to the livery in which the Class 31s were delivered when first built. This livery is expertly applied to the Graham Farish model using authentic colours, logos and fonts, whilst the technical features of the model are no less impressive thanks to the coreless motor, Next18 DCC decoder socket and pre-fitted speaker. Although all of this makes it easy to add sound to your model, why not make life even easier and opt for a SOUND FITTED model which will bring your layout to life straight out of the box. MODEL FEATURES: Graham Farish N Scale Era 8 Pristine BR Blue livery Running No. The first Class 31 entered service in November 1957 and the design was one of the Pilot Scheme locomotives ordered by British Railways to replace steam traction.

The Class was originally allocated to the Eastern Region, but gradually became common on both the Western and London Midland regions too. The Class 31/1s were the standard locomotives, distinguished from the first batch of locos - the 31/0s - which had Red Circle multiple-working control equipment, a non-standard feature that led to them being withdrawn relatively early in the late-1970s. The 31/1s were fitted with Blue Star multiple-working equipment, as found on many other BR classes, and all had steam heating boilers from new, making them ideal for hauling passenger services.

If you see anything which is incorrect in this listing, or wish to double check something, please feel free to ask a question. We include pictures of detailing packs, instructions and boxes etc if they are present and included in the price, if they are not in the photo's, you can safely assume they are not there.

If in doubt, please ask and we will confirm. The photographs are also part of the listing, please review them carefully. You can do this by selecting the Request Total button during Checkout (this works only when using the E-Bay Website, it does not appear on the mobile app). If you receive an item which is not in accordance with the listing, please get in touch BEFORE leaving feedback or opening a return. Resorting to bad feedback without giving us the opportunity to address the issue helps nobody. This item is in the category "Collectables\Model Railways & Trains\Railways & Trains\Locomotives". The seller is "hampshiremodels" and is located in this country: GB. This item can be shipped worldwide.