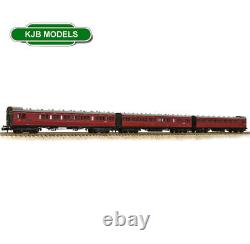 Metal wheels sets and pin point axles running in metal bearings. Detachable couplings in NEM pockets. Lamp irons and brake control apparatus (Brake coaches only). Sixty-two 60ft three coach'birdcage' sets were introduced by the South Eastern and Chatham Railway (SE&CR) between 1912 and 1915. The characteristic birdcage lookouts over each of the guards compartments give these sets their name and typify standard SE&CR non-corridor coaching stock. With their distinct character, being of pre-grouping origin, these sets were long lived and little modified during their lifetime, so have a wide applicability to modellers.