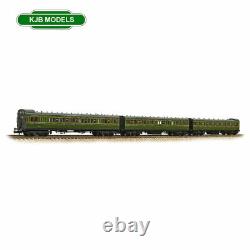 Sixty-two 60ft three coach birdcage sets were introduced by the South Eastern and Chatham Railway (SE&CR) between 1912 and 1915. The characteristic birdcage lookouts over each of the guards compartments give these sets their name and typify standard SE&CR non-corridor coaching stock. With their distinct character, being of pre-grouping origin, these sets were long lived and little modified during their lifetime, so have a wide applicability to modellers. The sets comprised 2nd/ 3rd class composite Brake Lavatory (later declassified to Brake Lavatory Third), a 1st / 2nd (later declassified to 1st/ 3rd) Lavatory Composite and Brake Third. The Composites were built in batches with two distinct body side variations.

The initial order had two wide windows on each side for the saloon, and the later examples had one wide and one narrow window for the saloon. The item "BNIB N Gauge Farish 374-911 SE&CR 60ft Birdcage 3-Coach Pack SR Maunsell Green" is in sale since Saturday, October 3, 2020. This item is in the category "Collectables\Model Railways & Trains\N Gauge\Coaches". The seller is "kjb-models" and is located in Hensall. This item can be shipped to all countries in Europe.