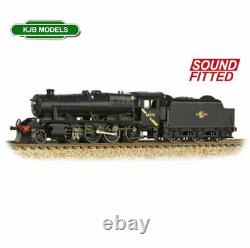 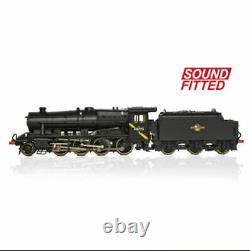 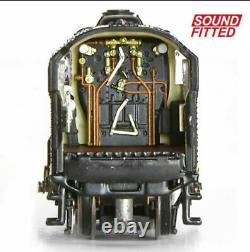 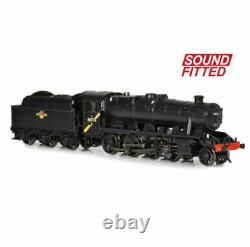 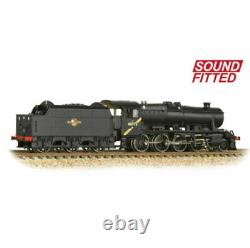 Making running this loco all the more realistic! Featuring a powerful loco-drive mechanism using a coreless motor. NEM coupling pockets are fitted to the front and rear, and fine detailing can be found across the model - from the metal handrails to the cylinder drain cocks, brake blocks and turned-metal safety valves. Inside the cab is a wealth of detail, whilst a hinged fall-plate is fitted between the locomotive and tender ready to accommodate a suitable crew. Pristine BR Black (Late Crest) livery.

F22 - Medium Duration Swell Whistle. F23 - Long Duration Played Whistle. F24 - Clear from the Guard. F25 - Going Under, Charlie. F26 -'Guard to Driver Instructions See Text. Please note that exhaust and motion, automatic and randomised sounds will also operate when this model is used on analogue control (DC) straight from the box! The type was extremely successful at doing what it was designed for, it was long-lived - to the end of British Rail steam in August 1968, and extremely widely travelled across the Midlands and Northern England into Scottish region and parts of Wales. The 8F design incorporated the two-cylinder arrangement of the Black Fives. They were initially classified 7F, but this was later changed to the more familiar 8F.

The War Department had 208 8Fs built by Beyer Peacock and North British Locomotive Company and requisitioned 51 more. Stanier 8F production for the WD continued until 1943, when the cheaper WD Austerity 2-8-0 was introduced. Production for British domestic use continued until 1946. Some 331 locomotives were built for the London Midland and Scottish Railway between 1935-45.

Despite some having operated in Scotland by the LMS, they were not common on the Scottish Region under BR ownership as the later WD'Austerity' 2-8-0 and 2-10-0 types were used instead. The 8Fs were successful and durable locomotives in BR service, with all 666 locomotives surviving until 1960 and routine withdrawals not beginning until 1964.

The first to go in 1960 was 48616, followed two years later by 48009. 4877348775 (the former Longmoor Military Railway locomotives which were the only 8Fs on the Scottish Region) were also withdrawn in 1962, but these were reinstated into London Midland Region stock in 1963. The remaining 664 were withdrawn between 1964 and 1968, with 150 surviving to the last year of steam on BR. Fourteen examples survive in preservation including some repatriated from Turkey. The item "BNIB N Gauge Farish 372-163DS DCC SOUND Fitted LMS Stanier 8F 48773 BR Black LC" is in sale since Monday, December 7, 2020.