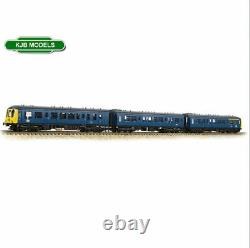 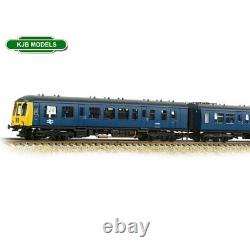 371-885A Class 108 3 Car DMU BR Blue. Brand new item from our New Model Railway shop in Yorkshire. The British Rail Class 108 diesel multiple units were built by BR Derby from 1958 to 1961, with a final production quantity of 333 vehicles. The units saw prolific use over the London Midland and Eastern regions, and are associated with Lancashire, the Cumbrian Coast route, services around Manchester and around Yorkshire and the North East.

They appeared in green, blue and refurbished blue and white liveries, including those sponsored by PTEs. These units stayed in regular service until 1990, when they began to be withdrawn from traffic. They were replaced on regional services by the new "Sprinter" derivative units, or by "Turbo" units on services around London. The final units lasted in traffic until October 1993, although many saw further use in departmental service, as sandite or route-learner units.

Good condition on withdrawal and lack of asbestos has ensured that many of this class are now used on preserved railway lines. This item is in the category "Collectables\Model Railroads & Trains\Railroads & Trains\Locomotives".

The seller is "kjb-models" and is located in this country: GB. This item can be shipped to all countries in Europe.